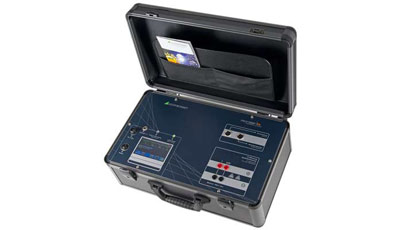 The PROFiTEST PV allows for the measurement of characteristic I-U curves, as well as individual photovoltaic modules and strings.

With the help of a patented process, the instrument is capable of ascertaining peak power, internal series resistance and internal parallel resistance directly on-site “with only one measurement and without entering module data”, which are then indicated at a high resolution color graphic touch-screen which is suitable for use in sunlight. 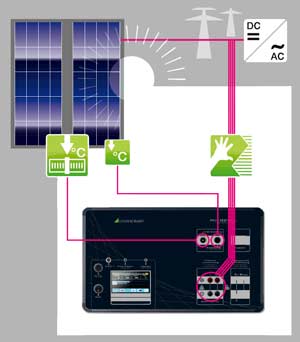 Troubleshooting in PV systems, as well as documentation of system quality, are executed quickly and economically during initial start-up and subsequent testing without a long learning curve.

This simple yet decisive test assures safety for the customer and eliminates consequential costs for the installer.

Measured peak power can, for example, also be used in order to determine peak ratio. Beyond this, acquired characteristic curves make it possible to draw further conclusions regarding the electrical characteristics of the measured module or string. And thus the tester is also suitable for use in research and development.

Why is measurement with capacitive load necessary?

On the one hand, measurement of characteristic curves for PV generators (modules, strings, arrays) must not be conducted too quickly (high dV/dt), because the measured characteristic curve may be changed in the case of rapid measurement (< 20 ms) due to the capacitive/inductive attributes of the generator or the test setup, in which case not only the characteristics of the PV generator are reflected in the measurement results. On the other hand, measurement must not be too slow either (> 1 sec.), because the danger of fluctuating radiant exposure is otherwise significantly increased, which would influence measurement results. This affects module temperature as well, which reacts relatively sluggishly but nevertheless can change within a matter of seconds.

module, as well as its layout and wiring connections, and normally has a constant value. For example, it amounts to roughly 1 ? for crystalline modules and more than 2 ? for thin-film modules. As of recently, measurement of internal series resistance can be performed with instruments from the Profitest PV product range. Only a single characteristic I-U curve has to be traced at the module for this purpose. On the basis of this characteristic curve, the instrument automatically calculates RS, as well as peak power PPK and parallel resistance RP.
Theoretically anticipated internal series resistance RS can be calculated. For example, this is possible with the software if the the following characteristic STC values are known for the module: Uoc, Isc, UMpp and IMpp.
The calculated RS value can then be compared with the measured value, which is read out by a Profitest PV after curve tracing. If the measured value is too high, wiring must be inspected for interruptions, corrosion, connection errors and underdimensioning.

Round Photovoltaics - our Business Partners

Research and Development round Photovoltaics
The Solar Power Experts / Trainings